ASPCA personality Type:
Constant Companion – Let me sit at your feet, walk by your side, and I’ll be your devoted companion forever.

He’s got the most expressive face I’ve ever seen on a dog, and his ears make him look like a bat. But he does resemble a cow. Also, when he was a puppy, the muscles in his ears weren’t quite strong enough to support themselves, so he had floppy ears for a long time. They grew at different rates, though, and one ended up standing up before the other, so for a while he had one floppy ear and one straight ear! I’ve always been disappointed he outgrew that.

Sparky loves people, particularly people with bare skin, which he will lick until the skin rubs off. He only actively seeks out people he trusts, though.

With other dogs, he warms up to them quickly, but seems okay with or without their company.

Sparky has no shame about begging. He lays his chin on your knee and stares at you with his doleful brown eyes, without blinking. He’s also smart enough to know who’s the easiest target in the room.

Appearance:  A
He is perfectly proportioned, has the sweetest big brown eyes and is always shiny as a penny.

Friendliness (People): A
Friendliness (Dogs): C
He loves people, barks and jumps, sniffs and licks with the obvious first-time-visit apprehensiveness. He won’t leave you alone and follows you everywhere, including the toilet to make sure you don’t fall down! However on the lead, with other dogs he will growl and bark, but with our other dog, Reg, he’s happy as larry.

Begging for Food: A
He stands in front of you whilst you’re eating and politely lays his head on your knee looking at you with big, needing eyes. He also slobbers over your knee so you have no choice but to give him some!

He would be a 5 but he loves to roll in nasty, smelly things when we let him loose in the neighborhood, but he’s adorable nonetheless!

Every now and then he will bark at a stranger, more than than he does now.

He loves to play with other dogs when his tennis ball isn’t around. If it is, he only wants me to throw it and will pitch a fit if another dog gets it or even comes near it.

Willie can do countless tricks like sit, lay down, roll over, shake, come, stay and give kisses, but his best trick is getting shot. I can point a pretend hand gun at him and say ʺBANG!ʺ and he will fall over and lay there.

Anytime there is a place too high for him to jump, I will get on my hands and knees and he will jump on my back and up to where he wanted.

He can also catch any tennis ball in the air before it bounces. BUT he is very obsessive with his tennis ball.

Any food I drop, I will call him over to clean it off and then he will stay and wait for more. We are very bad about giving it to him, so I don’t blame him.

Other important information: He does shed but not a lot and he is hypoallergenic. He is very good with kids!

Abraham is one handsome mofo. He is easily the most beautiful person in our household, but he doesn’t let it go to his big, manly square head. Also, sometimes he’s a bumblebee.

The only people that Abraham doesn’t like are people in wheelchairs and weirdos. Also, he humps puppies…so maybe he needs to stop and reflect on who the actual weirdo is.

This guy can sit pretty!

Cuddles are his food.

He’s pretty much the greatest.

Cavaliers are known for the long ears, feathering on their paws, and of course, those big eyes that most people just melt after seeing.

If you have a hand to lend, or lap to lay in, it doesn’t matter who you are. They want you to feel warm and welcome.

This breed doesn’t always see eye to eye with other dogs. They will most likely be the first bark at a passing dog just because they can.

This breed needs lots of training for it to truly perform.  They are motivated by treats, so you might get some sit, lay, and maybe an occasional stay, but as for showman ship, they just have no interest in the spot light.

This breed can easily become beggers simply because they like to be at your feet, especially when you’re sitting at a table.  However, unless the owner is a willing participant, they would much rather be near you then having to beg for food.

This breed is fantastic for families with small children, older parents, or singles who have time to be around the dog.  They don’t do well by themselves all day.  They’re one of the breeds that does well in packs, so most Cavalier owners have two or more dogs running around the house.

One interesting note is that they are originally a British breed.  Named for King Charles II and have blood lines dating back to the late 1600’s.  They were once used as hunting dog.  Trained to go down rabbit holes, fox holes, and chase some squirrels to low level trees, they became an indoor breed once the Terrier made its way into the hunting scene.

Beloved for their loyalty, many in Europe’s royalty class demanded they were part of their families.  Many castles still hang portraits of the Cavalier that date over 1000 years old. 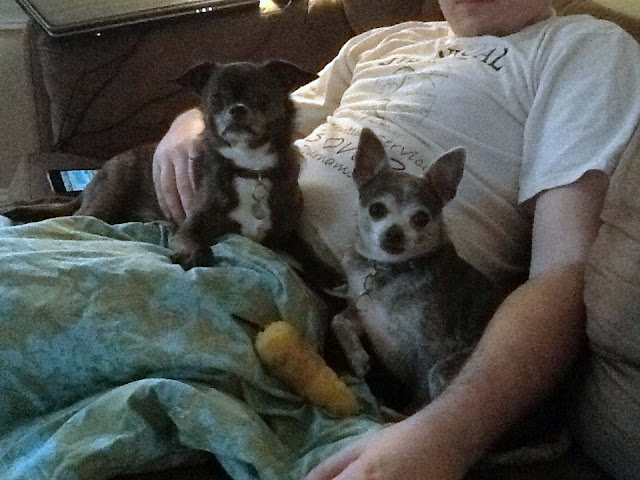 Everyone loves the little guys!

Kaiser shakes in his doggybed the whole time we have guests but Pops wants to sit in everyone’s lap.

We haven’t really trained them, but Pops does play fetch with us and his toy carrot!

These guys rule the roost! So when they give us “the look” they get whatever they’re asking for. 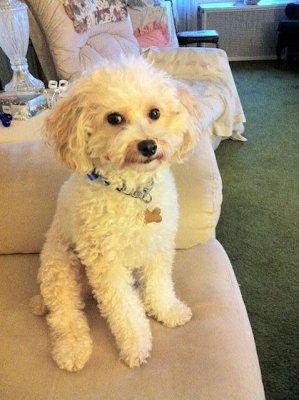 Sid looks like a real life teddy bear!  He makes you want to just cuddle!

He is friendly and loving if he knows and loves you.  He needs to warm up to strangers.  He is very protective otherwise, and does not do well if strangers come up to pet him.

If you say “kiss kiss” he will shower you with puppy kisses!

He will cry, moan and whimper if you’re eating something he really wants (and looks so darn cute doing it!).  He loves cheese and apples!

He is the light of our lives, and we don’t know how we ever lived without him.  He is a joy to come home to at the end of a long day.  He has our heart!