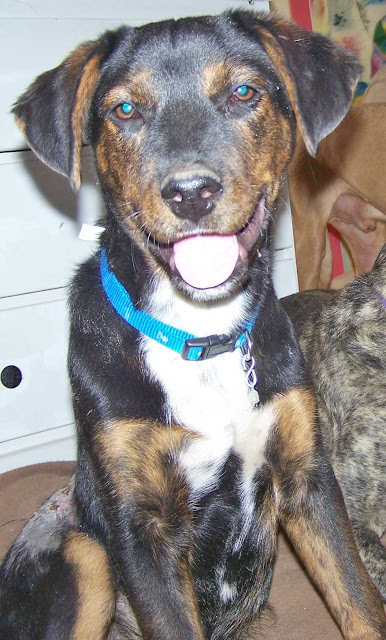 He is a rescue dog. He was abused so where ever he had sores, old scabs & had been chewing, the hair fell out (on lower back).  The rest of him is so naturally shiny and soft with a cute face & a head up,tail up swing fanny trot. He has very pretty colors. The best looking teeth I have ever seen.  He is 5 months old and his teeth are bigger than my great dane’s.

I have 3 large dogs from other rescues ages 6yr. to 10 yrs. Rescued as tiny pups.  He loves everybody.  They all share toys and put their bowls next to each other, there is no problem.  Same with treat time, he gets in the middle of the other 4, sits waits even if he is last.  If he gets growled at it’s for a reason he won’t cower but trots off to find something else to do.

This is a dog who has had no formal training or anything until he came here.  Most things he thinks of all by himself and amazes me: of course he is house broken, sits, shakes paw, he will put toys back in toy box, put laundry in basket.  I have collapsible bowls for water when hiking in desert, when his is empty he takes it to his seat in the truck.  Gets his leash out of their travel backpack & waits until we’re ready to go. He will get the scent indoors or out and follow until he finds what I ask him to find or trail ends.  For an untrained pup he’s pretty smart.  I can ask him to bring me the big booboo bag once, a couple of minutes later here he comes with bag in tow. I didn’t teach him these things, he came up with them and I just went with it.

I don’t allow begging it’s rude.  If a newby insists on trying like they all do I ignore him. If he keeps standing and staring at me everybody will get a treat but him. He caught on to that real quick now he waits for his treats the right way. 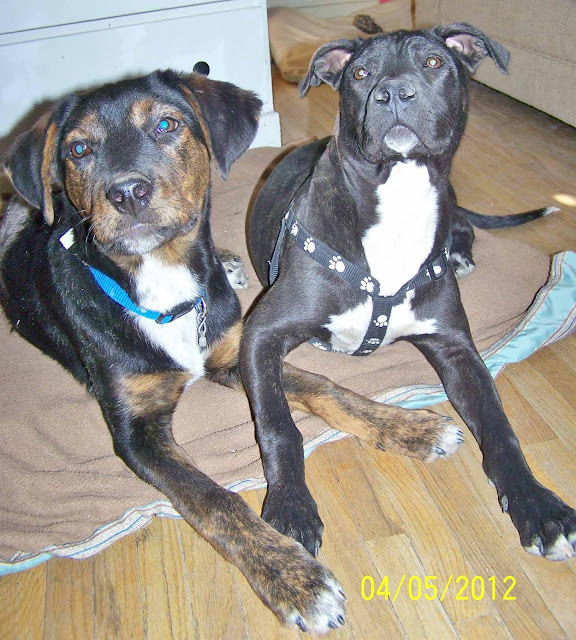 This pup is one of 4 dogs that were found at different times within a month, severely abused.  All had a chunk of skin ripped from his side.  He is the only one found still living.  He was the only pup.  He survived a week in a drainage ditch when the temp. was 19 at night he weighed only 10 pounds.  He & I have worked hard to get him to normal.  He is now a proud, happy pup, still healing some wounds, hair starting to grow back, put on 30 pounds and he is always by my side.  Protective, not mean, can be if need be. I have a vet but I live hours away & have to pay cash so I am for the most part the vet. I make the meds for his back, make him wear a tank top and he leaves it on.  His homemade cone stays on. He needs shots & neutering asap. He is too smart to let him get stupid because a female is in heat (all my dogs are fixed).  He has a smarty pants streak sometimes, it’s his breed. He has been through a lot and still been a good dog. He amazes me. He has talent & a lot of potential, search and rescue.  He is here for a reason, I wasn’t going to keep him (very low income, 3 other dogs & 1 other rescue pup).  Its been very hard but I see too much in him to throw him out.

Oh I named him Sidewinder because he could only walk sideways.  Not any more. 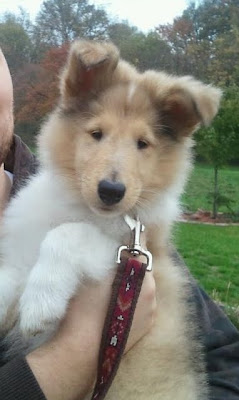 ASPCA personality Type: Busy Bee – I’m a naturally playful, curious, and trusting canine. Take me for a big walk every day; give me something to do. After my job’s done, I’ll curl up in front of the fire with you in the evenings.

He is a handsome little guy, except everybody thinks he’s a girl. Everyone tells me that I have a beautiful dog. They pretty much think he’s Lassie.

My little Jet is a lover.

We are in the Advanced class at Petsmart so he can get Canine Good Citizen (CGC) certification. I am thinking about getting him into Agility because he loves to learn.   As far as tricks/commands go, he knows: Sit, Wait, Stay, Down, Bang!, Bow, Spin, Up, Roll over, Kiss, Touch, Cross (paws), Speak, Quiet, Leave it, Take it, Drop it, Fetch, Come, No, Hop up (on the couch) and Left (we are working on Right). My next goal is to get him to put his toys away.

He knows he doesn’t get my food at mealtimes, but he does get lots of special treats cause he’s a Momma’s Boy. He loves Starbucks whipped cream.

I know I’m biased, but I love my little guy. The picture of him and Greg is from when he was a puppy, 2 months or so. He is 7 months old now.